Home
Reviews
On The Last Lecture
Prev Article Next Article 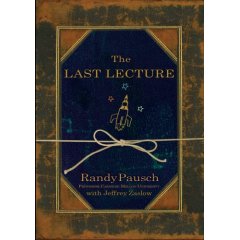 Starting today, Amazon will be shipping the hardcover version of “The Last Lecture”, by Prof. Randy Pausch and Jeffrey Zaslow. While I wait for my copy to arrive, I feel the need to express a few thoughts on the subject of this book. Over the past several months I’ve been following closely Randy’s story and was often tempted to write a few lines about his touching message and courageous attitude towards life and death. The release of this book is a good opportunity for me to do so, because I’d rather prefer my words to be a heartfelt thank you letter – while Randy is still alive – than a brief eulogy to be published when, sadly, he’s no longer physically with us anymore.

Randy Pausch is a popular Professor of Computer Science, HCI, and Design at Carnegie Mellon University, an ACM Fellow, and the founder of the Alice project (an educational software that’s designed to teach computer programming to young students. You can donate here.). He’s also a married man and the father of three small children. In August of 2007, Randy was diagnosed with terminal pancreatic cancer and was told that he would have very little time left to live. Grimly, he was given an estimated 3 to 6 months of remaining good health.

On September 18, 2007, Randy gave a lecture at CMU which made him famous worldwide. The talk was titled “Really Achieving Your Childhood Dreams”, and it was given as per tradition, as a hypothetical final lecture in which top academics are asked to summarize important lessons that mattered to them, as though it was their last chance to do so. For Professor Pausch however, this was actually the case.

His lecture is truly brilliant and provides important suggestions on how to achieve satisfaction in life, by living to the fullest. If you haven’t seen it before, please make sure you do, today. It’s not the usual self-help mumbo-jumbo, and it’s not a sad, depressing lecture either. It’s uplifting stuff that will motivate you and, to a certain extent, change your life if you’re listening carefully enough. I know it has had a deep impact on my own life, even if I’ve never had the chance to meet Randy and I’ve not (thankfully, so far) had any close relatives or friends die as a result of pancreatic cancer.

I love how, throughout his lecture, Randy manages to maintain an optimistic outlook on life, while at the same time not being in denial about his condition, or the future that his family is facing. His proactive, positive attitude, even when approaching death, is nothing short of inspirational. And I’m talking about the type of inspiration that you get after hearing a recording of Richard Feynman. Without even trying hard to inspire many, this man ended up doing just that for the millions of online viewers and TV spectators who watched the condensed version of Randy’s lecture on Oprah.

Here is a man who, with humility and dignity, decided to fight an aggressive disease for which there is no cure, by living his life to its fullest and having fun until his last day. Rather than screaming “why me?” or feeling depressed by how unfair his situation is, he’s opted to accept his condition no matter how unfortunate it is. While at the same time working diligently to make the best of the present, and to ensure a future for his wife and kids in which they are taken care of.

You can’t control the cards you’re dealt, just how you play the hand.
— Dr. Randy Pausch

It’s humbling, to say the least, when one start to think about the countless day-to-day opportunities that each of us has, just by the sheer fact that we don’t have an immediate “death sentence” over our heads. It makes you think about the value of time and the fact that most of us have no reason to feel sad or over-worried about the small problems that affect our daily routines. His lecture, and his ultimate lesson, are about embracing life and never giving up.

For those of you who have access to North American TV, tomorrow ABC will air an hour long Diane Sawyer feature entitled “The Last Lecture: A Love Story For Your Life”. Please, if you can, try not to miss it.

But it’s not just inspiration and the power of dreams that I want to talk to you about. We, as a society, have a very skewed perception of what constitutes a real threat. Terrorism is one of the most unlikely causes of death in America and yet it has received a huge deal of press coverage and public attention. Mad Cow Disease, Avian Flu, Africanized bees, just to name a few, are all very unlikely to affect you. Yet, in the collective mind they are perceived as huge risks, because they’ve been portrayed as such by the media. We have a huge elephant in the room though, and it’s being ignored. That elephant is cancer. Cancer is the second highest cause of death in the US, after Heart Disease, and in 2005 alone, it was responsible for taking the lives of 559,312 people. Or to look at it from another angle, 22.8% of all US deaths occurred as a result of cancer. 1 in 2 men, and 1 in 3 women, will statistically develop cancer in their lifetime. This means that if you’re married or have a life partner, there is a greater chance of one of you developing cancer, than of neither of you being affected. These numbers are astonishing, absolutely astonishing.

Society, as a whole, really needs to stop and reflect for a moment on the impact of cancer. Cancer is literally killing millions of people, and we are unnecessarily playing Russian roulette. The odds are against us. Any of us can get cancer, no matter how healthy we try to be. Cancer research has done a lot in terms of improving the survival rates of specific types of cancers. But others are, by and large, left in the dark, with very little funding and research going towards them. The five-year relative survival rate for melanoma went from 82% to 92% in the past 30 years, breast cancer went from 75% to 89%, and prostate cancer from 69% to 99%. Overall, considering all the types of cancer, in the past three decades, we’ve gone from a 50% chance of survival to a 66% chance. Those are all excellent results, and they essentially mean that if you get any of the cancers mentioned above, you have a fighting chance of surviving thanks to the research that’s been done and the funding that’s been put forth.

But not all cancers are created equal. Do you know what the survival rate for pancreatic cancer is? 4-5%. If you get pancreatic cancer, you may as well consider yourself dead – and usually within the span of a few short months. Over the last 30 years there have been extremely few advances in the field of pancreatic cancer research, and a truly severe lack of funding. I’m an atheist who doesn’t believe in prayer, but I do believe in science and that when you put money towards research, results usually follow in a fairly systematic manner.

Randy has been strongly advocating for the Pancreatic Cancer Action Network. I ask you to join me in donating to this very worthy cause, because donations can, and will, make a very real difference. I’m not good at telling other people what they should do with their hard earned money, but if you can, please contribute to this cause, as it will help to make Randy’s last few months worth of incredible effort all the more valuable. Many tech people donated to Ron Paul, Kucinich, Obama and other valuable political campaigns, now let’s make sure that the same happens for another type of very important cause – and let’s do it while Randy is still alive to witness our support.

The following is Randy Pausch’s public service announcement on behalf of the PANCAN:

This one is a public service announcement of The Lustgarten Foundation for Pancreatic Cancer Research:

And this is his testimony before Congress:

And finally, if you haven’t done so, I highly encourage you to watch his lecture:

With absolute sincerity, thank you Randy for showing us all how to live in the face of adversity.

Antonio Cangiano is a Software Development Manager at IBM. He authored Ruby on Rails for Microsoft Developers (Wrox, 2009) and Technical Blogging (The Pragmatic Bookshelf, 2012, 2019). He is also the Marketing Lead for Cognitive Class, an educational initiative which he helped grow from zero to over 2 Million students. You can follow him on Twitter.