Counting rows is an ubiquitous operation on the web, so much so that it’s often overused. Regardless of misuse, there is no denying that the performance of counting operations has an impact on most applications. In this post I’ll discuss my findings about the performance of DB2 9.5 and MySQL 5.1 regarding counting records.

For those of you who are not into science fiction, let me clarify that the odd title of this post is a tongue-in-cheek reference to the great novel, Do Androids Dream of Electric Sheep?.

I connected to the database, created the table, imported the data and benchmarked counting operations using ActiveRecord in a standalone script. Here is the code I used:

Please note that importing records in a huge transaction containing hundreds of thousands of INSERT operations is far from the most efficient way to import. Massive imports of data using the load/import facilities provided by each database is the way to go (also see the ar-extensions plugin). The lengthy import wasn’t benchmarked here though, so it isn’t determinant for this article.

people.tsv is a 92.7 MB tab separated values file that contains 875,857 records from the Freebase project (in my file I removed the header line, leaving only records).

For those who are not familiar with ActiveRecord, the queries executed behind the scenes are (in order):

While the table definition (for MySQL) is:

As easily verified by enabling logging with:

Or in graph form: 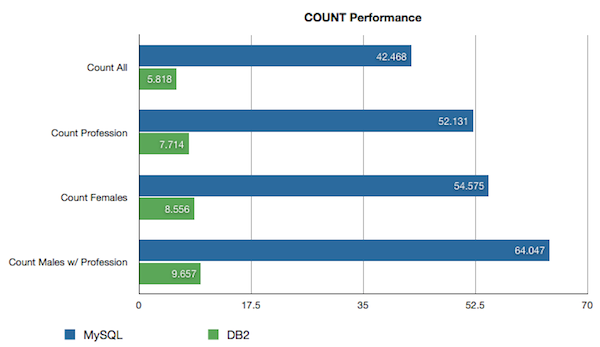 That’s an impressive difference. To be exact, in this example DB2 was between 6 and 7 times faster than MySQL. In the case of COUNT(*), DB2 counted almost a million records in 58 milliseconds, or in about the blink of an eye according to Wolfram Alpha.

For those who are skeptical, please note that DB2 was not manually fine-tuned in any way. The client codepage was set to 1252 to allow Greek letters, and the log size was increased to permit such a huge transaction during the import. That’s it, no optimizations were attempted. This is DB2 Express-C out of the box. It looks like smart androids count electric sheep with DB2 after all. 😛

The advantages of DB2 over MySQL when dealing with a massive volume of traffic are well known (and not limited to performance either), but DB2 can dramatically improve performance even for your average web application. And DB2 9.7, which will be released this month, increases the performance and the ability to self-tune itself to the available resources and required workload even further. If you’d like to try DB2 Express-C for yourself, you can download it here. It doesn’t cost you a dime to obtain and can be used for development, testing and production absolutely free of charge.

Antonio Cangiano is a Software Development Manager at IBM. He authored Ruby on Rails for Microsoft Developers (Wrox, 2009) and Technical Blogging (The Pragmatic Bookshelf, 2012, 2019). He is also the Marketing Lead for Cognitive Class, an educational initiative which he helped grow from zero to over 2 Million students. You can follow him on Twitter.